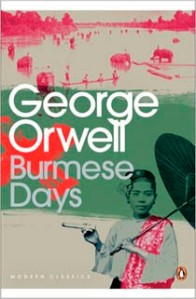 Based on Orwell’s time in India, the hero of this tale is John Flory – a rather melancholy figure whose work involves overseeing timber excavation. Set in the fictional district of Kyauktada, the plot revolves around the humdrum existence of British ex-pat regulars at the British club. When the dreary regularity of their lives is disturbed by the arrival of a young woman, Flory tries to win her over. Local government corruption, however, and the newcomer’s distaste of Flory’s apparent love of Burmese culture, only serve to drive a wedge between them:

Elizabeth watched the dance with a mixture of amazement, boredom and something approaching horror. She had sipped her drink and found that it tasted like hair oil. On a mat by her feet three Burmese girls lay fast asleep with their heads on the same pillow, their small oval faces side by side like the faces of kittens.

There’s more than a hint of racism in a few of the characters and Orwell was chastised in some quarters for his depiction of the ‘old colonials’, but he maintained that while parts of the manuscript were complete fiction, much of it was based on simple observations made during his stay in Burma.

Orwell’s publishers (Gollancz) wouldn’t touch the book for fear of libel charges and it was eventually published in the US with some changes to the typescript to avoid possible identification with actual living people. Some years later, several ‘characters’ from the book were nevertheless identified via the Rangoon Gazette, but by then, Gollancz had brought out a British version of the novel.

Though highly enjoyable, and in parts quite fascinating, ‘Burmese Days’ is a bit of a sad book – it tells of a time and place when respect for the common man is at a low ebb. And without giving too much away, Orwell’s hero does not come out of it very well.