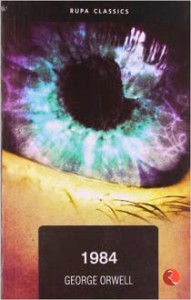 George Orwell’s fusion of political and creative writing reached its climax with the dystopian future world of his final novel. Many of the ideas and concepts he created in ‘Nineteen Eighty-Four’ are now a part of our language – Big Brother, Room 101, Newspeak and others are classic references to the authoritarian state that Orwell’s hero Winston Smith finds himself in.

Winston Smith works in the Ministry of Truth where he rewrites documents to match Big Brother’s latest version of the truth. He begins to investigate what the real truth is and meets a similar-minded individual in the shape of Julia. Naturally, things start to go wrong and Smith is arrested by the Thought Police…

‘You are afraid,’ said O’Brien, watching his face, ‘that in another moment something is going to break. Your especial fear is that it will be your backbone. You have a vivid mental picture of the vertebrae snapping apart and the spinal fluid dripping out of them. That is what you are thinking, is it not, Winston?’

‘Nineteen Eighty-Four’ is Orwell’s scariest book and has arguably had the most impact of all of his writing. Concepts such as Big Brother are all around us: CCTV, hidden cameras, phone tapping etc are commonplace now. Even the good old Internet, with its constantly updated and changing facts, figures and information, sounds suspiciously like Newspeak.

Diagnosed with tuberculosis, Orwell wrote much of ‘Nineteen Eighty-Four’ at Barnhill on the island of Jura. It was published in June 1949 by Secker and Warburg. Less than a year later, Orwell was dead.

There are sections of the novel that I found a wee bit tedious (the text of The Theory and Practice of Oligarchical Collectivism does go on a bit longer than I’d like), but at the same time, it’s an absolutely fascinating read and I can’t recommend it highly enough.