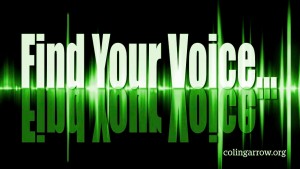 Yes, you read that right – this is a post about not finding your writer’s voice. But first let’s just clarify what I’m talking about.

Every writer has a voice. Sometimes it’s exactly like their actual voice (the writing sounds the same as the way they talk), but more often it’s a sophisticated version of that voice – interesting use of language, clever dialogue, original metaphors and so on – the sort of things that most of us have to work at to get right.

However, while many of us can identify the voice of our favourite authors (simply because we read a lot of their work), some writers constantly change styles, genres and vocabulary, so even though there may be elements of what we know, they keep coming up with something new.

And that’s what I’m aiming for – the ability to write in ways that are continually surprising. And yes, actually, I do think I’m well on the way to achieving that particular skill, but it did take quite a while to find my voice, and part of that journey was being able to recognize it when it arrived. And also when it hadn’t.

Here’s a few ways to avoid finding your voice:

I did this. Not intentionally, of course, but I did it. Many years ago when I was writing a lot of stage plays (well, trying to write a lot of plays), I read tons of work by ex-Hull Truck Theatre playwright John Godber. I loved his writing, I wanted to be like him, I wanted to write plays that were witty, hilarious, original and popular. And I assumed that the scripts I was churning out at that time were my own work. But they weren’t. They were Godber’s. Or at least, they were striving to be. When I eventually realised I was unconsciously copying my hero, I stopped and moved on.

I did this. Back in the early Nineties, I discovered there was money to be made writing short stories for women’s magazines, so I decided to give it a try. I wrote dozens of stories, stories about romance, lost love, new beginnings. I sent my precious tales off to magazines and waited for the money to roll in.

Of course, it didn’t. And why? Because I wasn’t really interested in all that girly stuff – I just wanted to write something that would get published. But none of those stories ever were published because the editors realized that while I may have had a smidgen of talent, I didn’t know anything about romance, and it showed.

Moral: Don’t try to write stuff you aren’t interested in.

I did this. I’ve done a bit of the ‘fan fiction’ thing with two of my fav characters (Sherlock Holmes and Doctor Watson). It’s fun and relatively easy, but of course, these guys aren’t my creations, so even if other people enjoy reading The Watson Letters, there’s always that thing about piggybacking on someone else’s hard work. And yes, I know some famous authors have done this very successfully (Anthony Horowitz has also had fun with Arthur Conan Doyle’s creations), but still.

Moral: make up your own damn characters!

Finding your own voice isn’t easy, but working at what you do – taking out anything in your writing that isn’t you, is the best way to hit the target. I still occasionally find myself slipping into an oddly familiar style, but I can usually spot it before the thing gets out of hand. Recently I came across a piece I’d written a few years ago. Reading it aloud, I heard the unmistakable Yorkshire twang of Alan Bennett. Which just goes to show.