As mentioned in my previous post, one of my tasks for this year is to get folk interested in my books (and ideally, buying them). As there are several ways to do that, I decided to tackle a couple of things I’ve been putting off: 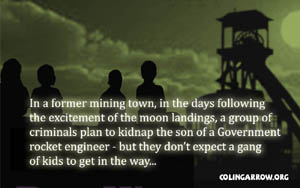 But before doing that, I thought I’d take a leaf out of Sacha Black’s book and make my Twitter images a bit more consistent, like including my website and such like (as in the pic opposite).

After prevaricating in this fashion for a while I got around to dong what I was supposed to be doing.

So, reviews – I had already managed to garner a couple of reviews, but just before the end of the year I got a lovely one – for ‘How the World Turns (and Other stories)’ – from sci-fi writer Stephen J Carter, so that was a nice little boost of the old confidence thingy. However, I haven’t actually tried very hard to get reviews as such, so thought it was about time I got my proverbial finger out. Again.

I’ve sent out seven queries today so far and have already had a response to one, which seems like a good result – I’m working on Bryan Cohen’s advice which goes along the lines of:

As to the mailing list, I’ve been getting to grips with Mailchimp (or Monkeypost as I call it). Although I like to think I’m fairly sensible when it comes to IT stuff, it did take me a while to work through some of the sections (ended up going onto good old YouTube for advice at one point). However, I got there eventually, and I now have the relevant links and responder emails set up. All I need now are actual people to sign up. (You can see my initial form by clicking here).

Of course, having spent so much time on this stuff, I haven’t done any work on my current book (Ariadne 7) for a couple of days, so I really should get back into that routine asap. And while I didn’t exactly take a load of time off over the festive season (spent New Year’s Eve working on the mailing list), I still feel as if I’ve been a bit lazy. Which I haven’t, but still…

So tomorrow it’s back to the Day Job. As Sergeant Phil Esterhaus used to not say:

Hey, hey, hey – let’s be careful out there and get that damn book written.

← Resolutions and Other Irritations
‘The Good Son’ by Paul McVeigh →