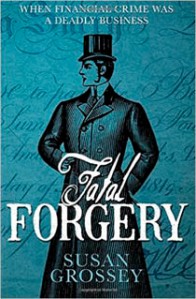 Long before the days of online banking, a big part of any banker’s working life was trust – but not all bank employees were able to resist the lure of hard cash. In 1824, respectable banker Henry Fauntleroy is arrested on charges of forgery, leaving Constable Samuel Plank to find out exactly what’s been going on, and why. However, Plank finds himself with an apparently impossible task, for even with the threat of the hangman’s noose waiting for him, Fauntleroy is set on pleading guilty. With single-minded determination, the constable begins to pick away at the evidence and soon discovers the apparent forger’s private life is not all it should be. Nevertheless, with all the evidence pointing in one direction, it’s only a matter of time before Fauntleroy faces the ultimate sentence.

Inspired by the real-life arrest and court case surrounding banker Henry Fauntleroy, anti-money laundering expert Susan Grossey’s first foray into fiction might well have been a little dry and lacking in the thrills department. But I’m happy to report that apart from leaving me a mite confused over some of the financial aspects of the case, I thoroughly enjoyed the first of Constable Plank’s adventures. The attention to detail and realistic depictions of the prisons at Newgate and Coldbath Fields, as well as the trial itself at the Old Bailey, place the reader right down there in the thick of it.

Susan Grossey’s writing is sharp and clever in her portrayal of the world she’s created, with a knowledge and feeling for her characters that brings them to life as clearly as if we were sitting down to tea with them. I’ll definitely be grabbing a copy of her next book in the series – ‘The Man in the Canary Waistcoat’ – in the very near future.

← ‘The Corrections’ by Jonathan Franzen
‘Oy Yew’ by Ana Salote →