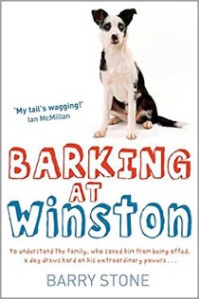 When battered rescue dog Bruce is adopted by a wild and wacky family, he finds his new owners have troubles of their own. As well as sharing several episodes from his own short life, Brucie uses his canine second sight to dig into the truth behind a complex tale of family life through a bunch of very different characters all vying for attention, love and happiness.

Barry Stone writes with a genuine warmth for language and he has a particular talent for portraying family life. I liked the idea of using Brucie as the narrator, but though the story started off well, when the animal revealed a talent for second sight I’m afraid I got a bit lost. Whether this was to do with the plot, or a lack of concentration on my part, I can’t say. Nonetheless, I thought it was neat way of revealing the family’s experiences, utilising a host of different viewpoints and voices to tell the story.

I’ve known Barry since I appeared in one of his stage plays many years ago, and I have to say I don’t think this is his best writing. Even so, I’ll be interested to see where his literary career takes him and what other surprises he has lurking in that inventive mind of his.