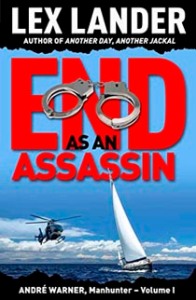 End As An Assassin

With the killing of a sleazy drug baron, hit man André Warner completes his final contract and heads for Geneva where he hopes to begin a comfortable retirement. Then on route to Monaco, he meets young and beautiful divorcee Gina, and finds himself contemplating a different future from the one he’d planned. But awkward questions from a nosy neighbour, and an encounter with a mysterious biker, prompt Warner to wonder if there’s something he’s missed. After a visit from the police and the threat of exposure, he’s left with difficult decisions to make, so with Gina at his side, he sets out to fulfil one last contract.

From the first page, I was pulled straight into the world of the assassin – a world of guns, exotic locations and fast cars, and whether I wanted to or not, I was already rooting for the one-man killing machine, and booing/hissing at the bad guys. Lex Lander writes about killing people like he really knows what he’s talking about. Whether this is the voice of experience or just the product of a damn good imagination, I can’t say, but his attention to detail reminded me of Frederick Forsyth, along with a chunk of that great man’s storytelling genius, too.

If you like your villains mean and your heroes handsome you’ll be right at home with this first instalment of André Warner’s adventures, but for the squeamish and scaredy-cat types out there, be warned – there’s a lot of killing, and innocent victims don’t always live to tell the tale.

This is a great start to the series and I’ll be adding Mr Lander’s other books to my to-read list very soon.

11 comments for “‘End As An Assassin’ by Lex Lander”