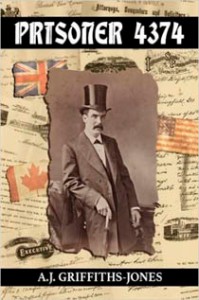 Scottish-born Dr. Thomas Neill Cream is often suspected of being the face behind the Jack the Ripper murders, but has he been misrepresented? There’s no doubt he was responsible for several deaths, but does the fact that he spent time in an American prison during the Whitechapel killings let him off the hook, or could he have been otherwise involved in the legendary murders? Beginning with Cream’s early years in Montreal, the author of this fascinating book allows the Doctor himself to tell his own story, charting his many romantic liaisons as well as portraying his progression from supplier of dubious ‘cure-all’ remedies, to abortionist and murderer.

With a special interest in Victorian villains, Ms Griffiths-Jones has utilised extensive research, accessing previously unpublished photographs and documents to bring Dr Cream’s story to life. Adopting an unconventional autobiographical style, she perfectly captures the tone and style of the period, writing in a voice that screams with authenticity and truth.

I loved this book from the first page, found myself held in the Doctor’s evil grip, and was unable to put the damn thing down (expect for a little sleep!) until the very end. The author’s attention to detail only adds to the authentic feel of the work, sketching perfect images of the times, the people and the murderous killing spree.

A. J. Griffiths-Jones is a highly talented and clever writer and I’ll be looking out for the sequel to ‘Prisoner 4374’ with great eagerness.

← ‘The Plague’ by Albert Camus
‘Sandlands’ by Rosy Thornton →