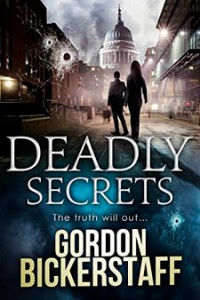 When biochemist Gavin Shawlens agrees to work on a new food additive, he becomes embroiled in network of intrigue and corruption. Discovering he’ll be working with former girlfriend Emma, he makes up his mind to walk away from the project rather than face seeing her every day. However, unknown forces quickly land him in a heap of trouble and Gavin finds himself caught in a deadly game of cat and mouse.

With foreign governments and secret organisations competing for what appears to be a remarkable new enzyme, Gavin and Emma are faced with a series of deadly encounters, where knowing who and what to trust, quite literally, becomes a matter of life or death.

Gordon Bickerstaff’s first novel in the Gavin Shawlens series rips along at a fair pace, trotting out more twists than Chubby Checker and a body count that’ll rival any murder mystery. Though at times the theory went a bit over my head, the author’s knowledge of biochemistry adds a sense of authenticity to the science part. Along with the action, there’s plenty of gory details too, so be warned – this is not a book for the feint-hearted. The clever plot heralds an uneasiness that corruption on this scale may not simply be the stuff of fiction, and while the occasionally over-written dialogue was a little distracting, it’s a minor niggle to what is otherwise a first-class thriller.

← How Songs Saved My Characters…
‘Betrayal’ by Sharon Brownlie →