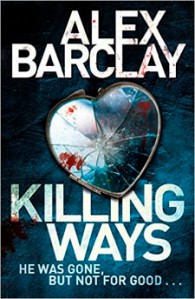 FBI Special Agent Ren Bryce and the Safe Streets Task Force get more than they bargained for when they begin an investigation into what looks like the work of a serial killer. When the murderer’s modus operandi appears to change, the team face an ever-increasing body count and precious little evidence.

Ren studies the case both at work and at home – her growing fixation to track the killer taking over her very existence, but can her chaotic lifestyle and tangled love life fit in with the need for solid detective work? When she meets a NYPD cop whose path has crossed that of the killer’s before, it looks as if the FBI might have the upper hand for once. However, the vicious encounter has left the detective deeply scarred and hanging on to an agenda that demands its own brand of justice.

If you like brutal, bloody and page-turning denouements, this’ll be right up your homicidal alley. It’s the fourth book in the Ren Bryce series and though the story includes references to the earlier books, it also works well as a stand-alone thriller.

Alex Barclay writes hard, gritty fiction that serves up the gore with a big shovel. Her characters are utterly believable, flawed and damaged and her prose sparkles with the kind of detail that gives this type of story exactly what it needs to raise it above a run-of-the-mill police procedural. I loved Ren’s bi-polar inner voice and the way she deals with her obsession to find the killer, and while she occasionally does stupid things like not waiting for backup and not taking her medication, I was rooting for her all the way to the end.