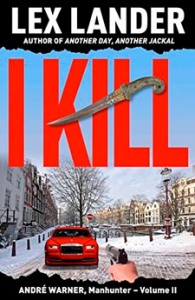 Haunted by the death of a young Italian girl, professional killer André Warner attempts to retire from his deadly occupation, however, with nothing else to do but indulge in drink, drugs and sex, he finally consents to another contract: the assassination of an Arab drug trafficker. With any luck, the job will haul him out of his downward spiral.

The contract takes Warner to Tangier, where he meets attractive American widow Clair and her beautiful sixteen year-old daughter. Finding himself irresistibly drawn to the pair and with plenty of time to fulfil the contract, he allows himself to get to know the women and begins to wonder if it might herald a change of direction in his life. However, the mysterious and annoying Dutchman, Rik de Bruin, is also interested in Clair, and constantly interrupts the budding romance. Trouble is – he won’t take no for an answer.

When Clair is snatched in what appears to be an Arab kidnapping plot, Warner is left to pick up the pieces. With little help from the police, he is eventually forced to take the girl back to his villa in Andorra, where he soon learns that his meetings with the Dutchman are not at an end.

This is the second book in the Andre Warner Manhunter series and I have to say I did wonder if the author would be able to keep the excitement at the same high-octane, gut-wrenching level. However, I’m happy to report that Warner the one-man killing machine still has plenty to offer in the way of thrills and spills, car chases and shoot-outs. The dialogue is sharp and witty and the geographical locations had my mouth watering. Lex Lander’s attention to detail is, if anything, even more realistic and convincing than in ‘End as an Assassin’. My assertion that this guy might be well on the way to taking over from Frederick Forsyth, looks like coming true very soon.

About Lex Lander
British-born thriller writer Lex Lander was raised in France, earned his degree in French and Italian in New Zealand and currently lives in Montreal. Lander is the author of political thriller ANOTHER DAY, ANOTHER JACKAL, published by Kaybec in 2013. Vol III in the series, THE MAN WHO HUNTED HIMSELF, will be published by Kaybec in the autumn. The first two volumes in the André Warner series, END AS AN ASSASSIN and I KILL by Lex Lander (published by Kaybec 1st May 2016) are available to buy online from retailers including amazon.co.uk. and all good bookstores including WHSmiths.