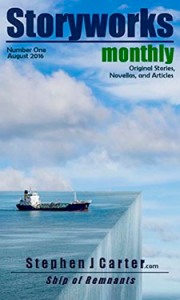 In this varied collection of new work, Stephen J Carter has fashioned an interesting series. In the tradition of Dean Wesley Smith (Smith’s Monthly), he presents a handful of stories, a novella, a serial novel and a piece for writers on inciting incidents in movies.

Being a fan of Dickens, I liked the idea of a serial novel that leaves the reader panting for the next instalment, though I’m not sure modern readers will appreciate waiting until the next one comes out! Nevertheless, Mr Carter does put on a good show and I’d be interested to see how he follows up in the next 2 books.

The short stories, while being different in tone, style and setting, encompass parallel themes. All three depict moments in time that are not only beautifully described, but often quite moving, despite the outcomes. ‘Descent on Abuwesi’ is part one of a serial SF novel and revisits characters from the ‘Zero Point Light’ books, where a group of survivors face an impending invasion. The novella in this collection (Ship of Remnants), tells what initially appears to be a run-of-the mill story about a group of passengers on a container ship who suspect all may not be as it seems. The writing here lulled me into a false sense of security and reminded me a little of Somerset Maugham. The denouement, however, was not what I’d expected.

From my previous foray into Stephen J Carter’s work (Storm Ring), I knew he could tell a good tale, but I think in this volume, he demonstrates a talent for telling a wide variety of tales, and I have to say I was damned impressed.