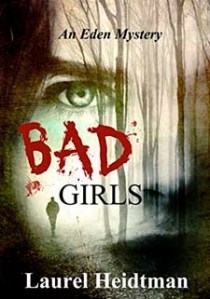 Coming from a troubled family background, Marnie Becker’s future starts looking up when her uncle, former Chicago cop, Cal Becker, offers to pay her through University. The pair move to a new town, but before Marnie has a chance to adapt to her new challenge, she is abducted. Thinking she might’ve resorted to her old ways and run off, Call isn’t too worried, especially as he too has a new life to get to grips with. But when the body of a young woman is found, Cal starts to worry that something serious might have happened, and seeks help from the local police.

Mystery thriller ‘Bad Girls’ is part of Laurel Heidtman’s Eden series, though the novel also works well as a stand-alone story. The author’s writing style paints realistic portraits of her characters, giving them depth and feeling, and while the character of Cal seems at times a little too preoccupied with his new love interest, the story rolls along quite nicely towards an exciting dénouement. A few false clues and a bit of timely misdirection generally work well, with several red herrings thrown in to distract us from the truth. However, though I’m not usually good at working out whodunit, in this case I did spot the real killer about halfway through, which marred my enjoyment a little (would have been great if it turned out I was wrong, but there you go).

Laurel Heidtman is an interesting writer with a talent for character. I’ll be keeping an eye on her work.

← ‘Screams in the Woods’ by Michael R Martin
‘Chase: The Hunt for the Mute Poetess’ by Thomas Dellenbusch →