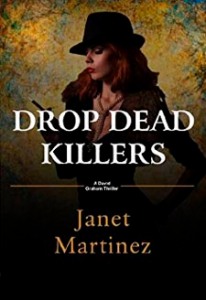 When a mysterious woman kills a scumbag lawyer, Detective David Graham thinks it’s a straightforward case, but then another member of the same firm is murdered and things start to get complicated. Along with his cop partner Alex, David sets out to track down the killer and whatever it is that’s driving her to these bizarre killings. When a friend takes David out on a double date, he meets the gorgeous Cassie and embarks on an affair. However, it seems his new girlfriend isn’t the only one interested in the handsome detective and he begins to wonder if someone closer to home could be involved in the murders. Can he work out the killer’s plan before it’s too late?

‘Drop Dead Killers’ is the first book in the David Graham Thriller series. I read it in one go and for the most part, enjoyed it immensely. With gory details kept to a minimum, the action jigs along quite nicely and there are plenty false clues and reddish herrings to throw us off the murder trail. On the down side, Ms Martinez does tend to repeat herself a little, but it didn’t spoil my reading pleasure.

All in all, a clever and somewhat intriguing murder mystery.