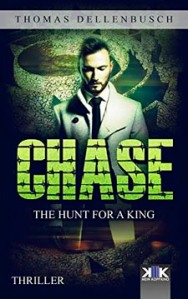 Chase: The Hunt for a King

With Scotland on the brink of independence, the country’s government plans to establish its own king. However, the new monarch’s lineage isn’t everyone’s cup of tea and when a protector of the impending royal family is murdered, the action prompts one of the surviving sons to contact an old friend. As Jerome and Chen Lu of the CHASE team began their investigation, they soon learn there’s more to solving this case than simply getting rid of the bad guys.

Translated from the original German, this is another one of Thomas Dellenbusch’s theatre-of-the-mind novels, intended to be read in the time it takes to watch a feature-length movie. This time round, the plot concerns ancient legends and lost manuscripts relating to the heir to the king of Scotland. With echoes of ‘The DaVinci Code’ and the like, the story centres on unravelling ancient documents and finding clues that reveal the identity of the true king.

While the story itself is entertaining and generally rips along at a fair pace, it feels like it’d work better as a full length novel. The explanations of the fifteen-hundred-year-old mystery interrupt the action and slow things down a bit, though as in the first book, the characters are believable and nicely drawn.

A quick and exciting read, with an interesting take on recent political events.

← ‘The Horse’s Arse’ by Laura Gascoigne
Which Twitter Are You? →

2 comments for “‘Chase: The Hunt for a King’ by Thomas Dellenbusch”