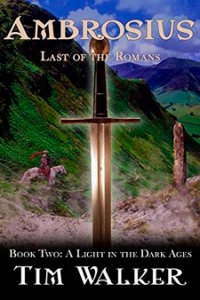 Ambrosius: Last of the Romans

In a time of myths and legends, Roman tribune Ambrosius Aurelianus returns to Britannia on a secret mission. With the Roman influence on the island quickly fading, the people have fallen back on their tribal roots. Along with his adoptive brother, Uther Pendragon, Ambrosius sets out to lead the Britons against King Vortigern and his Saxon army.

This is an interesting book, mixing historical fact with myths and legends to create a story that’s not quite history, but not quite fantasy. The attention to detail is accomplished and adds to the sense of realism, although I did feel at times the proliferation of ‘facts’ got in the way of the plot. There’s a lot to take in, and with a cast of characters whose names don’t exactly roll off the tongue, I sometimes had to re-read passages a couple of time before moving on. Nevertheless, it’s a rollicking good yarn with plenty to get your literary teeth into.

This is book 2 in Tim Walker’s ‘A Light in the Dark Ages’ series, and will delight anyone who enjoys historical fiction with a generous helping of Arthurian adventure.

1 comment for “‘Ambrosius: Last of the Romans’ by Tim Walker”