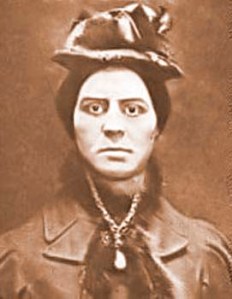 In my search for characters, I must admit I do enjoy a good murder. Some time ago, I started a series on Victorian villains, the first two being Amelia Dyer and Mary Ann Cotton. Ms Dyer ended up being the model for the baddie in the second of my Christie McKinnon stories, The House That Wasn’t There. Now that I’m thinking about the next book in that series, I’ve turned my thoughts to some of Dyer’s contemporaries.

Katie Webster was an Irish woman who took employment with widowed former schoolteacher, Julia Martha Thomas in Richmond, Surrey. Unfortunately, for both ladies, Mrs Thomas was a bit of a stickler for cleanliness and liked things to be done properly. When her latest domestic servant proved less than perfect, the two regularly fell into heated arguments.

One Sunday evening in March 1879, Mrs Thomas intended going to church and had expected Webster home in good time from her afternoon off. However, Katie W had indulged in a few jars at the local alehouse and returned late. Unsurprisingly, when she did get home, the women quarrelled before Mrs Thomas left for church. According to Katie Webster’s statement, when her employer came home later that night, another argument started:

In the hope of preventing her from screaming the house down, the hapless servant grabbed the older woman’s neck and strangled her.

Perhaps Katie Webster might have saved herself a lot of trouble if she’d made out the whole thing was an unfortunate accident, but instead, she opted to dismember her employer’s body and boil it in a large copper pan, in an effort to render it unrecognisable.

She then shared out some of the body parts between a Gladstone bag and a wooden box, before disposing of both in the River Thames. The box, however, was found by a workman who handed his find to the police. In nearby Twickenham, part of a foot was discovered and a subsequent inquest decided the remains belonged to the same body (the head of Mrs Thomas was not recovered until many years later, making identification at the time difficult).

Katie Webster, no doubt thinking she’d got away with it, decided to pass herself off as Mrs Thomas. This worked well for a couple of weeks until she sold items of furniture to a local landlord. When a deliveryman turned up to take possession of the goods and identified Webster to one of the neighbours as being Mrs Thomas, killer Katie realised her goose was cooked and did a runner.

Needless to say, she did not escape justice for long, and was soon arrested in her native Ireland. During the six-day trial, it emerged that Katie had made plans to sell some of her employer’s goods before the murder, making it all too clear that the killing was premeditated.

Katie Webster was hanged at Wandsworth Prison on 29th July.

Ms Webster’s shenanigans are perhaps a little too gory for a children’s novel, so I’ll have to tone things down a little. However, I do like the idea of someone masquerading as a ‘missing’ employer. Having said that, I don’t like to plan my books, so I’ll more than likely let the bones of the story bubble away (in that old copper pot), seeping into my unconscious, and see what emerges.