Embarking on the task of writing a new book is always a thrill, but that thrill doesn’t start for me until I have the title, because until then, I don’t have a clue where to start.

I little while ago, I wrote about coming up with the idea for a series of books in the horror genre aimed at kids. What I came up with at that time was a title for the series – Skeleton Cove Horror – and the title for the first book – The Demon of Devilgate Drive. 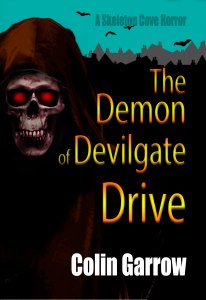 All well and good, but now that book is out in the world, I need to think about the next one. Now, normally, I don’t consider the cover image until I’m at least half-way through writing the book, since I’m more likely to come up with something inspirational if I actually know what the story is about.

This time, however, I started thinking about the title in conjunction with finding an image, so the two things were swirling around in my head at the same time. I knew I wanted the background image (the town of Skeleton Cove) to be the same as that of the first book, as that would help to give the series a bit of branding, so bearing this in mind, I began exploring possible titles.

My initial thoughts were along the lines of a murderous butcher (The Knife Man Cometh), a cutthroat hairdresser (The Demon Barber of Fleet Street), or a pirate. Going with the latter option, I played around with that old nugget: The Something of Something Thing.

I then resorted to looking up the names of actual pirates. Now, if you’ve ever done this you’ll know there are millions of them – since the dawn of time men (and occasionally women) have been plundering and ripping it up in an ‘Arrgh Jim-lad’ sort of way all over the world. And strangely enough, most of them have pretty ordinary, boring names, like William Walker and James Ford. However, there are others who sound more interesting: 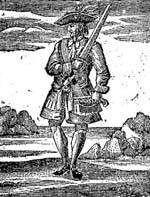 But it was the wonderfully named English pirate John Rackham (named Calico Jack after his penchant for wearing calico) who really caught my eye. Said to be the originator of the Jolly Roger, Rackham was also known for having two female crew members, including the infamous Anne Bonny.

Although Calico Jack’s life and exploits are fascinating, there’s no obvious link to explore in terms of horror (vengeful murder, ghostly curses, haunted treasure), leaving me no option but to do what most other writers do – make something up. 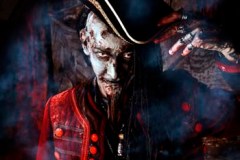 So now I’ve got the title: The Curse of Calico Jack, I needed an image to go with it and turned to my favourite stock photo provider: Dreamstime. Naturally, there were lots of pics of pirates (or blokes dressed as pirates), but one in particular stood out. With a little bit of Photoshopping, I turned a stock photo into what I was looking for and hey presto!

Now all I have to do is write the book.

NB Since posting this, the book has been written and is out there for the world to see. Now all I have to do is write the next one in the seres, currently titled The Axeman of Manslaughter Mansion (Mwah, hah, hah…)

Check it out here.

24 comments for “Creating Inspiration – Where to Start”