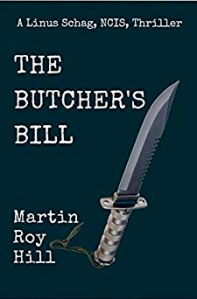 When a severed head and a bloody message are left at a security company, NCIS agent Linus Schag finds himself hunting down his closest friend, Bill Butcher. Linking the murder to a missing hoard of cash, Schag can’t believe his former colleague is responsible, but the evidence says otherwise. Caught in the middle of a conspiracy at the highest level, getting to the truth seems impossible. Can Schag untangle this web of corruption and clear Butcher’s name?

This is the second book in the Linus Schag, NCIS Thriller series by Martin Roy Hill. Though I hadn’t read the first one, it works well as a stand alone and had me gripped from the first chapter. Hill’s attention to detail is admirable, and while at times it felt perhaps a little too detailed (and a little distracting), this didn’t undermine the story. The writing is sharp and witty, with well-drawn characters and a believable plot. Given Mr Hill’s work record as a journalist, as well as experiences in the Navy Reserves and California National Guard, it’s also one of those books that had me wondering how much is based on fact, such as the plot-line around the military’s use of anti-malaria drugs. If this stuff is true, it’s pretty scary and if it’s not, it’s a great story.

An all-round good read that’ll keep you hooked until the last page.