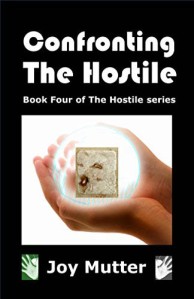 Retired Irish cop John and young DCI Damon become the unlucky recipients of Joe and Tile X – two deadly bathroom tiles whose hideous demands on the unfortunate men seem unstoppable. Forced to hand over the names of individuals for the deadly tiles to slaughter (in a variety of interesting ways), the pair strive to find a means of overcoming their predicaments. With the threat of painful repercussions if they don’t deliver the goods, is there anything the hapless twosome can do to liberate them from the lethal menace?

‘Confronting the Hostile’ is book 4 in The Hostile series and is as unusual a paranormal crime thriller as you’ll ever come across. Joy Mutter continues the story of the ever-expanding group of ghosts who track the tiles and their murderous ways from Manchester to Ireland, and manages to come up with yet more spectacular deaths and masterful massacres.

Part horror, part macabre comedy, the series works best when read in sequence. As I’ve said before, Ms Mutter has a knack of writing interesting, believable characters and this episode is no different. Lord only knows what she’ll come up with next, but I guarantee, it won’t be for the fainthearted.

5 comments for “‘Confronting the Hostile’ by Joy Mutter”