If you’ve read any of my posts about writer’s block, you’ll know I don’t believe in such things, but it isn’t only the lack of inspiration that can get in the way of creativity.

A few months back, my father was taken into hospital and I drove down to my native Northumberland to see him. I expected he’d pull round, get better, or somehow return to his former self, but dementia, pneumonia and old age got the upper hand and he died. It was almost five weeks later that I came back to Scotland, and three months more before I started writing again. 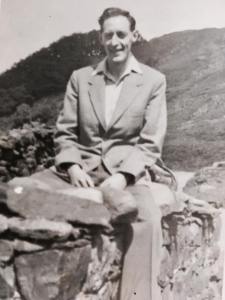 Death, as they say, puts things into perspective: it made me think a lot about my life and where I’m going. So, I wasn’t surprised to find my usual need to tell stories went out the window. Understandable, you might say, except that this was a new experience for me. And unlike the usual reasons behind writer’s block, it wasn’t a lack of inspiration that held me back, but simply an absence of the desire to write.

I began to wonder if that desire would ever come back, or if I’d somehow lost forever any smidgen of talent I had. Maybe the sixteen books I’d pushed out over the last few years would turn out to be all I’m capable of, and nothing else of any worth would ever emerge.

Even with these negative thoughts buzzing around in my head, I did eventually scribble a few book reviews and spent a bit of time Twittering and Facebooking etc, but whatever it was that had inspired me to keep working on my novels, and wanting to work on them, had gone – the motivation pushing me forwards, ensuring my continuing journey through the literary waters, disappeared. And so far, it hasn’t come back. At least, not completely.

Of course, the more time I spent not writing, the more I worried about it, so I did what I’ve always done when any hint of a blockage lurks on the horizon – I forced myself to write. As some wise old novelist once said, writing is like a muscle – you have to exercise it, otherwise you’ll lose it. So that’s what I did, and even if some of what I’m churning out is utter drivel, there’s always the thrill of re-writing.

Though I don’t know exactly what it is that’s changed, I know something has. Maybe in another three months it’ll work itself out, but until then, I’ll do what the British always do – make another cup of tea and just bloody well get on with it.

← ‘Cascade’ by Peter Harper
‘The Dark Half’ by Stephen King →

27 comments for “On Not Writing”