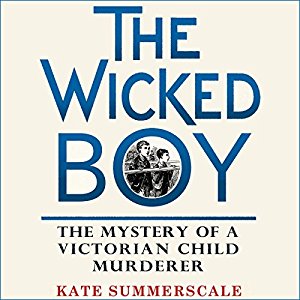 (Audio Book)
In July 1895, 13-year-old Robert Coombes and his younger brother travel to Lord’s to watch a cricket match. The trip heralds the start of a spending spree for the two boys who are soon observed pawning items from their family home and taking jaunts to the seaside in the company of grown-up friend Mr Fox. But when neighbours summon the police after noticing an unusual smell coming from the house, the decaying body of the boys’ mother is discovered in an upstairs room.

Kate Summerscale’s account of the trial and aftermath surrounding this horrendous crime, is a fascinating and absorbing read. Her research has uncovered many previously unknown details concerning the murder and the court case. She pays particular attention to the Coombes boys and the likely influences on their behaviour. However, rather than simply relating a history of the murder and its immediate repercussions, Summerscale uncovers what happened in the years following the killing in an attempt to determine if Robert was mad, bad, or merely the victim of circumstance, upbringing and his surroundings.

What I particularly liked about this book was the way the author widens the scope of her story to include details of related individuals and events. Her narrative gives a complete picture of what life was like for the characters populating this dreadful affair, while at the same time never allowing herself to inflict the reader with anything other than the facts of the case.

← ‘The Rats’ by James Herbert
‘One Punch’ by Keith Dixon →

2 comments for “‘The Wicked Boy’ by Kate Summerscale”

Mary and the Professor