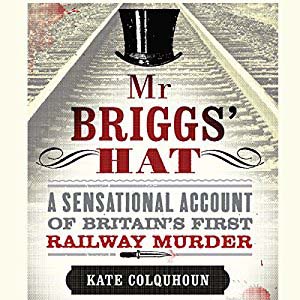 (Audiobook)
When Thomas Briggs got into a first-class carriage to travel home after visiting relatives, he couldn’t have known he’d never reach his destination. The discovery of bloodied seat cushions, a bloodstained hat and a broken watch chain, signalled what was to become known as Britain’s first railway murder. Would police be able to apprehend their prime suspect, and if so, would the evidence against him stand up in court?

Kate Colquhoun’s account of this horrendous murder explores the difficult and often ill-planned police investigation as detectives pursued their prime suspect, even though the man in question seems not have taken the trouble to conceal either his movements on the night of the murder, or his plans to emigrate. The trial too, gives an interesting perspective on the attitudes of both the authorities and the public at the time (particularly in relation to how the story was reported and misrepresented in the newspapers).

A fascinating and thought-provoking book that shines a light on a terrible crime and its consequences for British justice and police investigative methods.