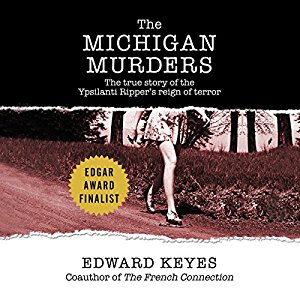 In 1967, a 19-year-old EMU student was last seen walking home to her apartment in Ypsilanti, Michigan. A few weeks later, her violated, naked body was found on an abandoned farm. Over the next few years, six more bodies were discovered, leading the police into a murder investigation that would taunt them with a maddening lack of evidence, suspects or the slightest clue as to who the killer might be.

Though I also have the paperback version, this review is based on the audiobook, which is superbly narrated by Pete Cross. First published in 1976, this is a fascinating account of a series of murders that terrorised Ypsilanti and Ann Arbor in the late sixties. The details of the crimes, particularly relating to the difficulties and frustrations of the police investigation, reveal a well-researched and skilfully told story of how one man almost escaped capture simply because he was exactly what the authorities did not expect – an intelligent, clean-cut all-American guy.

The story held my attention from start to finish and had me rooting for the cops through all their defeats and dead-ends. My only grumble in terms of the writing, is that the author chose to change the names of not only the victims and their families, but those of several witnesses and even the person responsible for the killings. While it may have seemed an understandable courtesy forty years ago, for anyone wishing to do further research now, it’s a bit irritating.

That aside, provided you have a strong stomach (there’s lots of gory detail), this is an enthralling book that’ll appeal to anyone who enjoys true crime.

← ‘The Invisible Man’ by HG Wells
‘Lair’ by James Herbert →

2 comments for “‘The Michigan Murders’ by Edward Keyes”