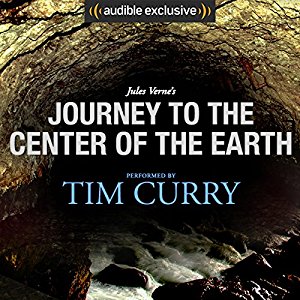 A Journey to the Centre of the Earth

(Audiobook)
One of the earliest works of science fiction, Jules Verne creates a fantastical subterranean world in this classic adventure. Along with his nephew Axel and Danish eiderdown hunter, Hans, eccentric Professor Lidenbrock, charts a course to the planet’s core, with only the occasional clue left by sixteenth-century explorer Arne Saknussemm to guide him.

The audiobook is narrated by that master of silver-tonguery, Tim Curry, whose variety of accents are by turns hilarious and impressive. The language does occasionally get a little over-technical, particularly when the Professor is explaining his theories, but otherwise it’s a rollicking good tale that shows off Verne’s fantastic imagination (the book was first published in 1864).

Classic sci-fi at its best.