A while back, I wrote about the advantages of standing up to write. Ernie Hemingway famously did it, as did Philly Roth and Ginny Wolf. And though I’ve had a standing desk at my work for a couple of years it was only when I moved to a new house recently that I got around to getting a desk of my own 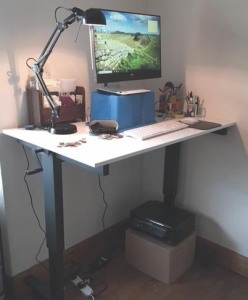 It has to be said that it isn’t the easiest habit to get into – standing up to write is plain weird at first and it’ll probably feel weird for a few days, if not longer. However, it’s worth persevering as there are several health benefits, including better posture, burning more calories, generating a genuine tiredness (so we sleep better) and prolonging life.

There are a few provisos in terms of posture, such as the old nugget about your eyeline being just below the top of the screen, keeping your head upright. With laptops this doesn’t really work as you’re always going to be looking down/hunched over the damn thing to some extent. Which is why (before I bought a standing desk), I forked out for a new PC too, rather than another laptop.

I can’t say it’s given my imagination a boost, but it has helped me stay motivated, which has to be good.

2 comments for “Standing with Hemingway”