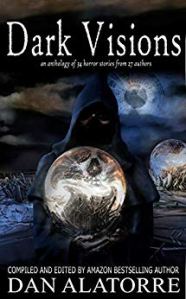 Compiled and edited by Dan Alatorre, this is another gathering of spooky stories that will appeal to horror fans, with tales from 27 different authors, including Alatorre himself.

What I like about collections of horror stories is that there’s usually something for everyone – whether you enjoy being scared witless or prefer to digest something that’ll make you consider the unknown, this is no exception. From the opening tale (by DT himself), we are plunged into the dark and creepy streets of New Orleans where an old skull catches the eye of a naïve tourist. As with many of the stories in this volume, it’s not one to read on a dark night with the wind whistling through the trees.

Allison Maruska’s box full of photographs (in The Stranger) left me with a feeling of uneasiness, while Jennifer Ruff sets the scene for a new start for her ailing heroine in The Right Time to Move On. Other tales, such as JA Allen’s The Storm begin pleasantly enough with a hot night and a family that can’t sleep, but an old flame heralds a menacing presence. There are thoughtful and suitably creepy contributions from Ernesto San Giacomo, (whose mysterious villain gets more than he bargained for), Robbie Cheadle and Geoff LePard, as well as Dabney Farmer and Christine Valentor, who also featured in Alatorre’s previous collection, The Box Under the Bed.

A truly splendid anthology of horror stories that’ll please anyone who enjoys things that go bump in the night.