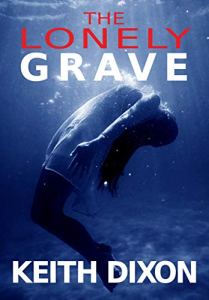 Private investigator Sam Dyke is called in when the student son of a businessman goes missing. But when Sam tracks the lad down, he begins to uncover a tale of lies and murder that the family have strived to keep hidden for years.

Keith Dixon is one of my favourite indie authors, but up to now I’ve only read his Paul Storey series. As ‘The Lonely Grave’ is the ninth book in the Sam Dyke series, I’ve got some catching up to do, but this book was a great place to start, as it works well as a stand-alone too.

Sam Dyke is an interesting and well-drawn character – he’s shrewd and clever with an enjoyable surliness that stops him being too much of a smarty pants, but still allows us to admire him like all the best PI heroes. As always, Mr Dixon’s prose is superb – he has a way of writing that makes the text seem deceptively simple, but like a stealth bomber, bubbling beneath the surface, the tension grows towards a cracker of an ending. Unlike the ‘Storey’ novels, the author delves into the minutiae of family relationships to unearth the seething tensions that have kept the Minton family teetering on the brink of collapse for years. This gives the novel a depth that isn’t often found in private detective stories and adds another layer of appeal to its characters.

With eight more books in the Sam Dyke Investigations series to catch up on, I’ve just ordered the first one, ‘Altered Life’ in paperback. Maybe I can read all eight before this gifted and imaginative writer throws another one at us. Damn you, Keith Dixon, for being so talented.

3 comments for “‘The Lonely Grave’ by Keith Dixon”