Canadian-born author Ken Stark grew up on a diet on comic books and disaster movies so it’s no surprise that he ended up writing horror novels. Dig in for a scary ride…

You are known mainly for writing horror, so what scares you?

Not much, actually. I can imagine myself getting scared in certain situations, but the chances of finding myself in those situations are just too remote to even contemplate. I’m not likely to ever be lost at sea with sharks circling beneath my feet, and I can’t imagine suddenly taking up spelunking and getting myself wedged into a crevasse a mile underground, so I will never know if I would be as scared as I think I could be. That said, I do have one lifelong phobia that may or may not have found its way into my writing. I wonder if anyone can guess what it is…

How do you deal with tasks like editing and cover design – do you outsource such work, or are you an all-round do-it-yourself indie?

I am the luckiest writer ever. My first books were published traditionally, so there was a talented team working hard behind the scenes on my behalf, and by the time I decided to go indie, I had already met some of the most talented people in the world. I can edit myself, but a proof-reader is essential, and things like cover design and formatting are simply beyond me, so I outsource all of that impossibly difficult work.

How involved are you in social media groups (such as Facebook), and do you think it’s useful for writers to subscribe to them?

In today’s world, social media is everything. I could hang a poster on a wall and have a few dozen people see it, or I could post a tweet and have it seen by thousands. And of course, the more active one is, the more exposure they’ll have. That hour or two a day might take a huge bite out of writing time, but marketing a book is every bit as important as writing it.

All authors know how important branding is, especially when writing a series. How do you approach starting a series (such as Stage 3)? 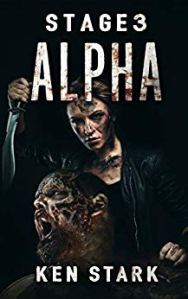 When I wrote Stage 3, I didn’t know if it would ever be published, let alone if it would warrant a sequel. It was only when the book took off that I knew I had the chance to tell the rest of the story. But even then, I was branding myself and my work with every tweet, every interview and every blog post. Readers want to know what to expect when they see an author’s name on a book cover, whether it’s part of a series or not. I can certainly stretch the boundaries of horror, and I can even jump the fence into a whole different genre, but I’ve branded myself as a writer of scary stories, so that’s what my readers expect. Fortunately, there’s nothing I’d rather do than hand out nightmares, so we’re good.

Are you a plotter or a pantser?

I always know the major plot points and character arcs and how the story will ultimately end, but I find that the story flows much more organically if I give it some freedom along the way rather than adhere to a rigid outline. And quite frankly, it’s amazing what can come out of left field when I’m not looking.

How long do you typically spend writing each novel?

I’m happy with anything under a year. I’m getting a bit quicker as I go, so let’s call it nine months. Nine months seems about right for creating a new life, don’t you think?

Have you taken any courses to help with the writing process, or to help tackle the many technical aspects of being an indie author?

No, I never have. My writing is what it is, and people will either like it or not. And even though I know that I should learn more about the technical aspects of indie publishing, most of it is so mind-numbingly boring that I drift off before the second paragraph. I mean, really. Font size? Justifying? At what point does any of that get fun?

Have you ever used real people or real experiences to create characters/plots?

Some scenes will include snippets of conversations I’ve had, or some portion of an event I’ve experienced, but that’s as far as it goes. Thankfully, no one I know has ever gone through anything as bad as what usually happens in my stories.

Have you ever written a character with a specific person in mind?

Quick answer; no. Longer answer; a character could be made up of one part a guy I knew at work, one part some random person I saw on the street the other day, and equal parts me, a character I saw in an old movie, and the hero or villain of something I might’ve read decades ago. My characters come from a melting pot of everyone I’ve ever known, seen, read, or crossed paths with rather than any one human being. At least, so far. I keep threatening to murder my friends in the most horrible ways, so we’ll see.

How does your writing for adults differ from the way you write for young adults?

The only difference between the two is the language. I’m perfectly fine with scaring the crap out of a younger reader, but I’m not comfortable swearing in a YA book. Everything else is exactly the same. If I were to hold back the horror based on the age of a reader, or try to use simpler words in the telling, it would be cheating both them and me.

I have no set schedule. I simply write when I can, and for as long as I can. When life interferes, I might only be able to squeeze in a few lines. If I have a whole day free, I’ll gladly spend every minute of it in that other world.

Do you think it’s important to read in the same genres that you write in?

Absolutely, but it’s just as important to read other genres, too. We can’t grow as writers if we never stray from our insular little worlds.

What is the best investment you ever made in your writing?

Oh, that’s an easy one. Time, my friend. Time. It takes a lot of time to write a book. Time that I might’ve spent with family or friends or just sitting down with a good book. Time is a killer. It’ll come to get us soon enough, so one has to ration it out sparingly. And by the way, this answer that takes thirty seconds to read might’ve taken me twenty minutes or more to write, rewrite a half-dozen times, and edit down to its bare bones. Such is the life of a writer. Nothing will ever be good enough until it is, and every bit of it takes time.

How much of yourself do you put into your books?

More than I ever thought I would, that’s for sure. It’s easy enough to pour oneself into the main character of a piece, but I can see some tiny bits of me in almost every character I’ve ever written. At times, it feels like a kind of multiple personality disorder, with various parts of me sounding off against one another. But it works, so who am I to argue?

How critical are you when reading the work of other writers?

I know what I like in a book, but I also know how much blood, sweat and tears went into writing that book, so I stuff a sock in my inner critic’s mouth when I’m reading and just let the author take me along for the ride.

If there was a creative arc detailing where you are now and where you want to be, what would be at the end of that arc? Honestly, I’ve already had more success than I ever imagined I would, so the future is a blank slate. Yes, vast sums of money and movie deals would be awesome, but I didn’t start down this road chasing after fame and fortune. If future-me is able to look back proudly on a body of work and know that he had fun all along the way, I believe I’d consider that a happy ending,

Who or what inspires you?

There is nothing I’d rather do than write, so I need no inspiration there. As for what inspires a particular story, that can come from anywhere and everywhere. For a horror writer, all it takes is putting a little twist on the normal and following it through to its most terrifying conclusion.

What are you working on now?

I have two pieces on the go right now. Of course, I’m going to keep the zombies coming, and I’m happy to report that Stage 3: Charlie is well underway. But my plan is to alternate the release of the next Stage 3 book with a more traditional, stand-alone horror, so I’m also working on another as-yet untitled book. All I can say about it right now is that something is happening worldwide, and we watch it unfold through the eyes of a handful of people in small-town America. It’s global horror in a microcosm. Good and creepy, just as daddy likes.

I reviewed Ken’s YA novel Arcadia Falls on this very blog a while ago, but if you’d like to find out more about the man and his writing, check out his website, or his interview on APN (interview begins about 7 minutes in).