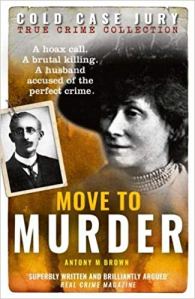 Liverpool, 1931. A telephone message is left for insurance agent William Wallace at his chess club, informing him that a Mr Qualtrough would like to meet him concerning an endowment policy. But following the instructions the next evening, Wallace finds the address he’s been given doesn’t exist. Returning home, he discovers his wife Julia has been battered to death.

The murder of Julia Wallace at 29 Wolverton Street on 20th January 1931, is one of the most puzzling cases in British history. It has remained unsolved due to the lack of solid evidence, but in this new exploration of the case, Antony M Brown examines trial transcripts, police reports, witness statements and prosecution files to explore every aspect of the case.

Taking the evidence of the telephone call as one of the key elements in the murder, the author traces the movements of each of the ‘players’ involved and looks at who had the opportunity to make that call and why. Using detailed maps, photos and street plans, he arrives at five possible conclusions. But which one is right? In a new twist on every true-crime reader’s wet dream, the author invites readers to cast their own online vote as a member of the cold case jury.

A meticulously-researched, and thoroughly absorbing book that will thrill true-crime readers everywhere.

← ‘The Poisoned Chocolates Case’ by Anthony Berkeley
‘Do You Mind If I Smoke?’ by Fenella Fielding →

5 comments for “‘Move to Murder’ by Antony M Brown”