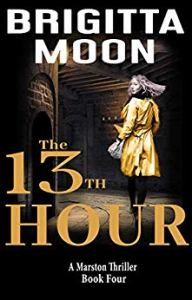 The 13th Hour: A Marston Thriller

Mayor Harden has a secret, and someone who knows everything is willing to spill the beans, but with the choice between money and family, which tune will the mayoral puppet dance to? Meanwhile, baseball coach Jessie Owens finds himself arrested and thrown in jail. Can police officers Romero, Billy and Copeland sort out the truth from the lies before someone gets hurt?

This is the fourth novel in The Marston Series, though only the second one I’ve read (the last one being A Husband’s Will of Fortune). As with the previous book, I found Ms Moon weaves a clever web, with several plot lines that initially don’t seem to have much to connect them. But the connections are there and as the truth emerges, I had to admit there were a few surprises. The characters are well-drawn and their relationships with each other give the book a realistic feel.

A great read for lovers of detective dramas and complex plots.