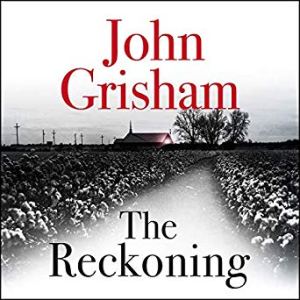 (Audiobook)
1946. In Clanton, Mississippi, the townspeople are left shocked and confused when local farmer and war hero Pete Banning drives over to the Methodist Church and shoots and kills the Reverend Dexter Bell. Instructing a bystander to fetch the sheriff, Banning returns home to await his arrest. However, what baffles everyone, not least Banning’s family, is his outright refusal to explain or justify his actions.

It’s a few years since I read anything by John Grisham, so I wasn’t sure what to expect with his latest offering. Although one section of the book deals with the court case, it is the effect on the hero’s family that moves the story along, as we shift back and forth in time from Pete’s war years and marriage to the aftermath of the trial and its effects on the Banning family.

This feels very much like one of those classic American novels in the tradition of John Steinbeck, as it follows the family from the early years to the repercussions of the trial. And though it seemed at times like it could almost have been two novels, I found it by turns gripping, thought-provoking and totally heart-breaking. A classic.