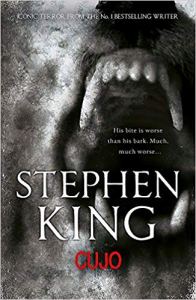 A huge Saint Bernard dog named Cujo is young Brett Camber’s best friend. But after an encounter with rabid bats, Cujo begins to feel different, and pretty soon he sees The Boy, The Man and The Woman as individuals who pose a threat to him and who need to be dealt with in the only way he knows.

I remember seeing an interview with Stephen King when he told the story of how the idea for this book came about, though as the author was going through a drink-and-drugs phase at the time, he doesn’t recall much in terms of the actual writing, other than he finished it in only a week. Focusing on a small number of characters, the plot reveals their individual flaws and shows how their lives begin to unravel, leading to a terrifying confrontation under the angry gaze of a once-loveable family pet.

While it’s not one of King’s classic horror tales (no vampires, ghouls or creepy aliens), this is nevertheless a cracking good yarn that kept me hooked from page one.

A must for all Stephen King fans.

← ‘The Five’ by Hallie Rubenhold
‘Caina’ by Joe Albanese →

5 comments for “‘Cujo’ by Stephen King”