Without the benefits of 20th-century technology, the faces of Victorian villains couldn’t be plastered all over the media, so how were their images and stories relayed to the general public?

These days when a murder is discovered, the news hits the media in text, photos and on film, not to mention Facebook and Twitter.

However, back in Victorian times, there was only word of mouth and, for those who could read, newspapers, penny dreadfuls and chapbooks. All of these were used to inform the public about murders and other heinous crimes, but for anyone eager to own a longer-lasting memorial, Staffordshire potters were quick to jump on the killer bandwagon.

In 1849, married couple Frederick and Maria Manning found themselves in deep water when they were arrested for killing Mrs Manning’s lover, Patrick O’Connor. The pair were duly trotted off to the gallows in November of that year and their public execution even attracted the attention of Charles Dickens, who later based one of his characters on Maria Manning (Hortense, in Bleak House). The murderous couple were immortalised in porcelain, though their images make them look as if they’re off to church, rather than to the gallows.

The Mannings also had their exploits exalted in broadsides, which were written quickly and illustrated with generic images.

Maria Marten and the Red Barn

Thirty years earlier, the village of Polstead in Suffolk was the scene of a grisly discovery when Maria Marten’s body was found buried in the now infamous Red Barn. Her lover William Corder was soon tracked down, by which time he’d already married someone else. The murder was turned into melodrama, ballads and broadsides, as well as Staffordshire figures of Maria, Corder and the Red Barn itself.

Isaac Jermy and his son were shot dead by James Rush in the porch of their home, Stanfield Hall. 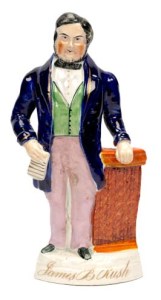 One of Jermy’s tenant farmers, Rush faced possible eviction due to mortgage arrears. Donning a wig and in disguise, the hapless farmer proceeded with his murderous plan, but failed to kill Jermy’s wife. Rush hoped his mistress Emily Stanford would provide an alibi, but the woman refused, stating she had no idea of his killer intentions. This, together with the still living Mrs Jermy, who recognised the farmer (despite his attempts at disguise), proved to be his undoing. He was hanged in Norwich Castle in 1849.

Perennial poisoner Doctor William Palmer was hanged in 1856 for the murder of his friend John Cook, though the physician had already seen off several other people by the same method, including four of his own children. Palmer used strychnine and in the main, seems to have carried out the killings for monetary gain (he defrauded his mother out of thousands of pounds in a bid to cover gambling debts). He also killed his wife Anne, after insuring her life for thirteen thousand pounds. Palmer blamed her death on cholera, which at that time had reached pandemic proportions and was responsible for around 23,000 deaths in Britain between 1846 and 1860.

Thankfully, we’ve moved on from celebrating killers by casting their likenesses in clay, but as there’s no shortage of books, movies and TV serials to remind us of the evil elements in our society, figurines of Charlie Manson, Myra Hindley and the Yorkshire Ripper would likely find a host of eagers buyers.

Incidentally, if collecting themed pottery of this kind interests you, it’s worth knowing that one version of the Red Barn was sold at auction in 2010 for a little under twelve thousand pounds!

← ‘Beyond’ by Graham McNamee
‘The Moving Target’ by Ross MacDonald →