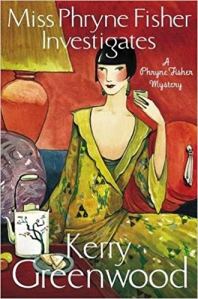 Fed up socialite Phryne Fisher solves a mini mystery at a London party, but the life of the itinerant partygoer has lost its charm, so when another guest asks her to track down his daughter in Melbourne, Phryne jumps at the chance. Meeting up with a host of colourful characters, Miss Fisher finds herself involved in a murder plot, abortion and drug dealing, as well as getting jiggy with a Russian dancer.

I bought this after watching the TV series and though there are marked differences in the plot (not least the lack of romantic frisson with Inspector Robinson), it’s an entertaining read. Phryne is a very likeable character, whose feisty and stylish take on solving crimes is delightful. And while the plot is not totally gripping, the humour and quirkiness of the characters (such as Bert and Cec) more than makes up for it.

This ‘cosy’ mystery is an easy, but nevertheless very witty read that’ll entertain booklovers who like their heroes and villains well-defined and occasionally a little too obvious.