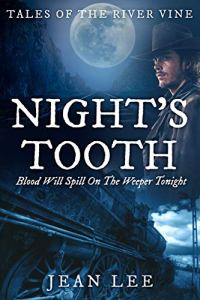 In the Mississippi River Valley, during the latter part of the nineteenth century, bounty hunter Sumac seeks shadowy bandit, Night’s Tooth. However, though gifted with magical powers, Sumac isn’t the only one tracking the mysterious outlaw, and he’ll need to keep his wits about him if he aims to get the better of Sheriff Jenson and the golden boys…

A mix of classic western and fantasy, Jean Lee’s novella is set on the edges of her Princeborn universe (see Fallen Princeborn: Stolen). Her use of language is delightful, with an unusual writing style that’s as clever as it is original. The characters are an interesting lot, too, (like the Sherriff with the squirrel-tails moustache). Drop them all into an atmospheric Clint Eastwood-type setting, and there’s plenty of action to keep the reader guessing what’s coming next.

Unlike Fallen, this one isn’t aimed at Young Adult readers, but if you like cowboy stories with a dollop of the weird and strange, this’ll be right up your old west Main Street.