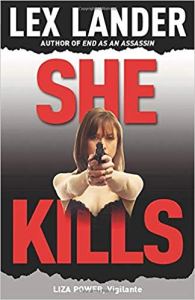 Unable to forget about her rescuer André Warner, Liza Power sets off to France to find him. But Warner’s home in Andorra is vacant and his boat is now occupied by a couple of dubious-looking characters. And to make matters worse, Liza’s movements attract attention that puts her mission in jeopardy – with a French cop, a Mafia enforcer and sordid sex-peddler Rik de Bruin on her trail, the young woman will have to keep her eyes open if she’s to find André and keep them both alive.

Taking a character from one of his earlier books (I Kill), Lex Lander drops Liza Power into a plot where trouble is everywhere. With the usual twisty-turny storyline, there’s plenty of action and plenty of villainy to keep us guessing what’ll happen next. My only criticism is the clunky segue from Lander’s usual first-person narrative to the all-seeing narrator, which takes up the rest of the book. This sort of thing is jarring and never less than irritating, and while I can understand why he’s used this technique, it always comes over as a bit of a cop-out.