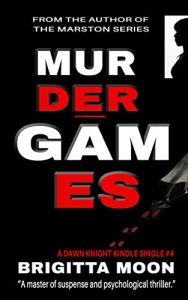 Novelist Dawn Knight is a best-selling author and nets herself an interview on a popular talk show. But Dawn’s new novel has a problem as it seemingly reveals the real killing of an out-of-towner. With the police studying the novels as possible blueprints to murder, can they catch the killer before it’s too late?

This is the fourth book in the Dawn Knight Short Story series and is probably best read in order. As is my wont, I didn’t do this and went straight to number four. Having read a couple of Ms Moon’s previous books, I reckoned I’d know what to expect. Like the others, it’s set in the Marston area, so I was already familiar with officers Romero, Billy and Copeland. The story is a clever one, though I maybe would have got more from it if I’d read the other three Dawn Knight episodes. Nevertheless, it’s an enjoyable read with plenty of clues to keep us guessing who’s going to end up dead or in the clink.

Another great read for lovers of detective dramas and murder mysteries.

← ‘She Kills’ by Lex Lander
The Secret Novel-Writing Formula (Maybe)… →