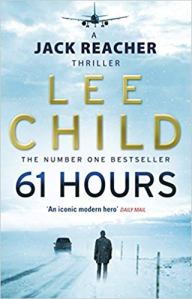 Winter in South Dakota. A bus load of old folks on a touring holiday. And one hitchhiker – Jack Reacher. When the bus skids off the road and crashes, Reacher helps out and soon finds himself awaiting temporary lodgings in a small-town police station. But something’s wrong in this town – with a biker gang holed up a few miles down the road, a vulnerable witness needing police protection and a potential killer on the way, Reacher must stand up and do what’s right. Unless the bad guys get there first.

This book is number 14 in Lee Child’s ‘Jack Reacher’ series and like the previous one (Gone Tomorrow) there’s not as much ass-kicking as we’ve come to expect from the ex-army wanderer. Nevertheless, the detail in this book is almost as mesmerising as Reacher’s stock-in-trade hard-man exploits. The situation he finds himself in doesn’t demand constant hand-to-hand combat, but it does boast a cast of fascinating characters, precise and perceptive detail and a tension that simmers throughout the book like a time-bomb. And indeed, as the title suggests, there’s only so many hours available before the crap hits the proverbial.

Despite the lack of action, this is an engrossing and completely thrilling book that kept me turning the pages in anticipation.