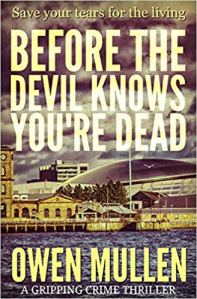 Before the Devil Knows You’re Dead

When whistle-blower Gavin Law goes missing, Glasgow PI Charlie Cameron sets out to track him down. But Charlie soon discovers there’s a lot more to the mystery than he first thought. Could a surgeon who left a woman brain-damaged have killed Law to keep him quiet? Or has the woman’s husband taken revenge for the doctor’s mistake? Meanwhile, Charlie’s old adversary Sean Rafferty has his fingers in several political pies, exerting influence on the city’s corrupt councillors in a bid to serve himself a slice of a multi-million-pound project.

Once again, Owen Mullen’s snappy dialogue and multi-layered plot throw his hero into the path of the bad guys, while adding a bit of something special in the guise of a potential new love interest. As with all good crime thrillers, a series of apparently unconnected scenarios are deftly weaved together to keep us on the edge while the author guides the strands of his tale into another sparkling page-turner.

This is book 3 in the Charlie Cameron series and as usual it’s a rollicking good ride. Go Charlie!