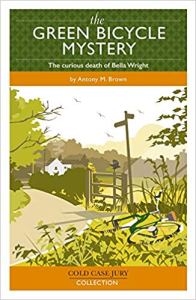 On a lonely country lane in 1919, a bicycle is found lying across the road, next to the body of a young woman. Utilising fresh evidence, witness statements and court reports, Antony M Brown suggests several possible solutions to a murder case that has remained a mystery for one hundred years.

This is the second book I’ve read in the author’s Cold Case Jury Collection (though it’s the first in the series), and like the previous one – Move to Murder – Brown outlines his meticulously-researched theories precisely and comprehensively. The role of prime suspect Ronald Light is explored in great detail, suggesting possible reasons for his actions if he were (as was decided at the time) not guilty of murder. But evidence that suggests the exact opposite is also on the table. Along with maps, photographs and excerpts from the court case, Brown builds up a picture of the individuals involved, their movements at the time and their contributions to the mystery. At the end of the book, we are presented with the evidence and three possible scenarios.

The author then invites readers to cast their own online vote as a member of the Cold Case Jury. Only when a reader has done so, will they be able to view the overall decision based on the votes of previous readers.

A thoroughly absorbing book that will thrill true-crime readers everywhere.

4 comments for “‘The Green Bicycle Mystery’ by Antony M Brown”