Is it possible to transform two of the most famous characters in crime fiction into something new, without simply repeating what many others have done before?

The popularity of Sherlock Holmes continually inspires writers to pay homage to the creations of Arthur Conan Doyle, as well as offering the opportunity to fashion new scenarios based on the world-famous characters and their adventures. Aside from the many spin-offs about Holmes and Watson, several additional characters in the canon have inspired book series — Inspector Lestrade, Mycroft Holmes, Mary Watson and even Mrs Hudson are all out there solving crimes, murders and misdemeanours. So, in dreaming up my own tribute, I set a few rules concerning how, where and when my version of the detecting duo would live, function and dish out their special brand of justice.

From the first book, which was little more than an experiment, I began with a premise I hoped would encompass anything that followed:

In a not quite Post-Victorian, steampunk parallel universe,
Holmes and Watson continue their fight against crime…

To begin with, I thought setting the whole thing in a parallel universe would allow my heroes to potentially meet up with anyone, dead or alive, from any time in history, real or fictional and in any circumstances that might call upon the services of Messrs Holmes and Watson. Although many things in their universe are comparable to our own, there are a few variations. Place names, for instance, can be spelled the same as their real-life counterparts — Scotland Yard, Chichester, Fleshmarket Close —while others might have subtle differences: Londen (London), Bottingley (Cottingley), Huge Island (Hugh Town, Isles of Scilly).

In addition, I wanted to use fictional places such as Milford Junction (Brief Encounter), Midwich (The Midwich Cuckoos) and The Slaughtered Lamb (An American Werewolf in London), along with a cast of characters that might take the stories in different directions. Thus, Hannibal Lecter (fictional serial killer), Bill Sikes (fictional villain), Kate Warne (real-life Pinkerton detective), Penelope Pitstop (animated character from The Wacky Races) and even Charles Dickens and Agatha Christie (famous novelists) get their turns in the limelight. As I see it, there’s no limit to where I might take my heroes.

After the first book (Something Wicker This Way Comes), I saw the need for more structure in the stories and decided to introduce another regular character who might act as a foil between Holmes and Watson. I brought in Mary Watson, whose wonky eye, penchant for sordid affairs and talent for solving crimes, added another dimension to the adventures. 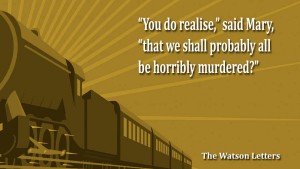 It was also important to consider the overall story arc for the series, so events that occur early on, might have a bearing on later adventures. This is most obvious in the current book (Murder on Mystery Island) where the detecting duo are faced with revelations they did not expect.

The biggest challenge with The Watson Letters series, is that all the books begin life as posts on the Watson Letters Blog. This means that each episode appears there first and eventually makes it into book form. Originally, I’d thought this was a clever idea. It was probably inspired by Stephen King’s book The Green Mile, which first appeared as a six-part series. King said later that it forced him to work with what he’d already written, and so gave him a different set of rules to work by.

Since I don’t plan any of my novels, this didn’t seem like too difficult a task, but I soon found that producing episodes of anything between 500 and 1500 words at a time, and without worrying what would happen next, sometimes threw up challenges that were damned difficult to get out of – like killing off Sherlock Holmes and then having to work out how he might survive. On the other hand, it forces me to be continually inventive, which is part of the fun.

The other main difference with my version of Holmes and Watson compared to more realistic versions, is the irreverent and often bawdy humour. While I wanted them to be clever, I didn’t want them to be boring, and more than anything else, they had to be entertaining and funny. So, as long as the stories continue to make me laugh, I’ll continue to write them. When they don’t, I’ll stop.

Details of all the Watson Letters books are on my Books for Adults page.

← ‘Worth Dying For’ by Lee Child
‘Bone Deep’ by Sandra Ireland →