Thinking back to when you started writing, is there anything you would do differently in terms of the writing, or in getting your books to market?

I started at the age of 7 and have written intermittently ever since. I should have tried harder to find an agent, so that I could concentrate on the creative stuff and not get involved in marketing. I don’t believe publishers do a lot to promote most new writers unless they paid out a hefty advance, and need to recover the outlay. 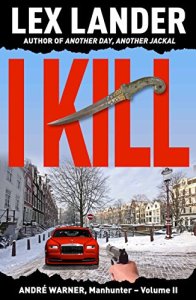 Mostly myself, but I do keep an eye on market trends. A UK agent once told me not to write fixated on producing a best seller, but write what I enjoy writing and I will produce a better book. That was some time ago, but I think he was right. Of course, if one is writing popular fiction one can’t stray too far from the conventional. I am aware that my Warner stories are somewhat offbeat thrillers, as they invariably insinuate a romantic interest in amongst the crime and violence. I’m not sure it works as well as I would like, but I dislike writing to a formula.

As someone who’s done a fair bit of world travel, how much does this knowledge/experience assist with the plots of your books?

Tremendously. I try to set my stories only in places I have actually visited. For instance, in the case of ‘Blood Red and Bardot’, which is set in Nice, I spent over two months there, and wrote the book during that time. It helped me to recreate the atmosphere of the city and the Cote d’Azur in general. (I also once met Brigitte Bardot in St Tropez, where she still lives, long before I wrote the book).

The work and lifestyle of your main character Andre Warner requires precise details about guns and combat. Assuming you weren’t a hitman in a previous life, where does this information come from?

Pass. A lot of info, but not all, can be found online.

Have you ever used real people or real experiences to create characters/plots?

In the case of people, often. It helps me visualise the character and bring him/her to life. The women protags in particular are almost always based on someone I knew and generally fancied. The arch villain Rik de Bruin, who featured in ‘I Kill’ and ‘She Kills’, was based on a Dutchman I knew and who let me down badly in a business/personal matter. I took my revenge by creating a really nasty character.

In the case of real experiences, I often introduce a little cameo based on something or someone I encountered. For the rest I must pass again.

Do you have many unpublished novels/stories?

Hardly any. There are a few that I started but dropped. All my completed novels have been published. Wait, I stand corrected. My very first serious attempt at publication, an adventure story titled ‘Atrocity’, set in Rhodesia before it became Zimbabwe, was rejected by a publisher way back when, in part because it was too long for an unknown writer. (160,000 words!)

Anything from 1 hour to 8 hours. I usually write 6 days a week, but there is no set schedule. I try and write in the mornings, but often find I am more creative in the evenings.

How much of yourself do you put into your books? 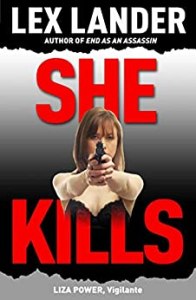 There are a lot of my views and habits in the Andre Warner character, which is why I write the Warner books in the first person. His politics, tastes in women and music, pastimes, languages, places et al. But the way I envisage him he doesn’t look like me. In fact the way I describe him he resembles a friend from my youth whom I last saw over twenty years ago.

What can we expect from Lex Lander in the years to come?

A new trilogy of psychological thrillers, another ‘Jackal’ story, and Vol VII in the Warner series. Possible sequels to ‘She Kill’s and ‘Blood Red and Bardot’, but these would be several years down the track.