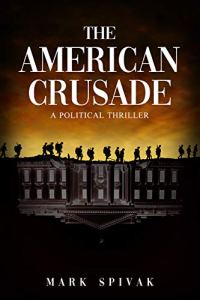 May 2001. Islamic terrorists crash a Boeing 737 into the Mall of America, killing three thousand people. With the nation in fear for their lives, Vice President Robert Hornsby has the opportunity to stamp his fervent beliefs on his country and become the most powerful vice president in American history. But can Hornsby succeed in his war on terror, under the glare of the media, or will his plan collapse around him?

With its stark similarities to 9/11, Mark Spivak takes a grim look at America’s recent past, revealing the thoughts, opinions and fears around a terrifying attack on the American people. Given the premise, I expected this book to be a fascinating and thrilling read, but after an interesting start, I found the constant inclusion of long, boring speeches (mainly by the President) totally ruined my enjoyment.

Spivak is certainly a talented writer, but any book that produces a desire in the reader to skip over long passages, cannot hope to hold that reader’s attention for long. And while the message of the book is a thought-provoking and serious one, reaching the end left me feeling nothing but relief.

No doubt some folk will find this a fascinating read, but any book, even one with a serious and vital topic at its heart, still has to draw the reader in. And this one didn’t.