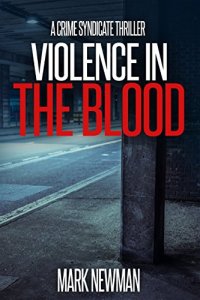 Glasgow villain Malkie Thompson has ambitions. Feeling constrained by his boss McAlister, he decides to take over and establish his own firm, and if that means getting rid of anyone who stands in his way, that’s fine with him.

This is a novella that introduces Mark Newman’s Crime Syndicate series. The plot rolls along rather like a movie script and we get a real sense of the motivations behind each of the characters. As a story it’s a wee bit too short to get a proper taste of the author’s talents, but there’s plenty of snappy dialogue and some nice one-liners that help things along. Some reviewers mention the graphic violence, of which there’s a fair chunk, but stories about gangsters need to be realistic, so if you’re averse to blood and guts, I’d stay away.

Interesting first book that bodes well for the others in the series.

2 comments for “Violence in the Blood by Mark J Newman”