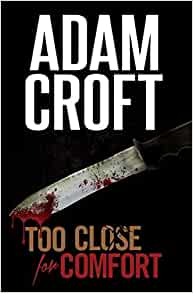 Embarking on her first murder investigation, DS Wendy Knight is thrown in with dyed-in-the-wool hard-nosed DCI Jack Culverhouse, whose attitude to newcomers is less than forgiving. With a gruesome murder case on their hands, Knight must work out who to trust and who to fear, and before she knows what’s happening, her own life is in the killer’s sights.

This is the first book in Adam Croft’s Knight & Culverhouse series and the first I’ve read by this author. I bought the book after reading the first few pages, which sounded pretty good, but I have to say it wasn’t quite what I expected. Though there’s nothing intrinsically wrong with the story, one of the main characters (Culverhouse) is a difficult man to like, having no redeeming features—his behaviour and language put me off from his first appearance. If this had been one of those how-the-police-force-used-to-be books it might’ve been excusable, but I couldn’t see any point portraying him as a total git.

Admittedly, published in 2011, this was indie author Mr Croft’s first foray into crime writing and having read a bit of his latest novel ‘What Lies Beneath’, I can see a marked improvement in the quality of his writing. It’ll be interesting to see how the new one compares with Too Close for Comfort. What this space.

2 comments for “‘Too Close for Comfort’ by Adam Croft”