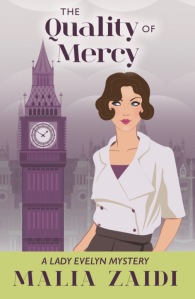 Returning home to London, Lady Evelyn plans to start her own detective agency and having done so, soon finds herself with a dead body on her hands. With her forthcoming marriage to Daniel also on the cards, Lady E must also consider what she wants out of life. In the meantime, she has to hunt down a murderer before he or she strikes again.

This is book 5 in the Lady Evelyn Mystery series, and the first I’ve read by Malia Zaidi. The author’s books have been compared to those of Agatha Christie, although I’d say there’s very little similarity between them other than the times in which they are set—if anything, they’re closer to Kerry Greenwood’s Phryne Fisher books (with less panache). The plot is of the usual lady-detective type and the heroine is an affable young woman who knows her own mind. The other characters too, were interesting enough to keep me reading, but I did find a couple of niggles which distracted me from the story. The author’s writing style is of the long-winded variety – that is, she takes a long time to say anything. Consequently, the plot rumbles along at walking pace, rather than the pacier tempo that crime novels usually favour. There’s also an awful lot of exclamation marks which really aren’t necessary, as the meaning is clear without them.

Aside from that, and although it’s a rather longer read than it needs to be, this is an enjoyable period crime novel with an appealing main character.

NB The original version of this post first appeared as part of a Damppebbles Blog Tour.

2 comments for “‘The Quality of Mercy’ by Malia Zaidi”