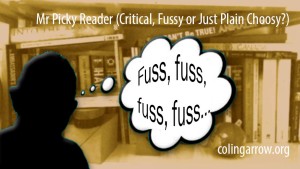 Alright, alright, I admit it – I’m a picky reader.

To be clear, I’m not talking about the term ‘picky reader’ as applied to kids who can be hard to please bookwise or those who really don’t want to open a book in the first place. No. What I mean is the change I’ve noticed in myself in the way I read and respond to books.

As an author, I’m aware that my writing style has changed over the last few years (for changed, read improved massively) and those changes have encompassed the usual things you’d expect for someone who spends a lot of time writing. They include better spelling, punctuation, smarter sentence structure and so on. In short, better writing.

And this of course means when I read books by other authors, I demand a similar standard of prose.

Whenever I’ve looked back at books I read as a teenager, I’m often horrified at the standard of grammar, dialogue and general storytelling skills. A good example of this is the Hardy Boys adventure The Wailing Siren Mystery, where my criticism wasn’t just about the quality of the writing but inconsistencies in the plot. But it’s usually more common issues that irritate me.

That Was (the Week That Was)
‘Was’ is a word that has begun to irritate me more than any other. It’s a word we all use, but some of us use it more than most. Some writers use it in almost every sentence and don’t realise how so much repetition can pull the reader out of the story. It’s like when you notice someone has sticky-out ears – once you’ve seen them, you can’t not look at them. 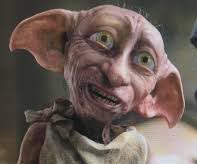 Repetition can be a useful tool – ask any political speech writer. But repeating words simply because you can’t think of a better one is lazy, and again it’s an easy way to pull the reader out of the narrative.

Apart for the overuse of exclamation marks, which never fails to ‘get my goat’ (as my dad used to say), one other habit assists authors in driving readers away from their work.

There are some schools of thought that believe using alternatives to ‘said’ spices up your writing, making it more interesting. It doesn’t. Maybe using the odd one or two variations here and there might make the author feel they’re being imaginative, but examples like those below should be avoided unless you’re using them ironically (like in a faux-1940s story):

‘That’s right,’ he affirmed.
‘I don’t care,’ she exclaimed.
‘Tell me the truth,’ he demanded.
‘Go screw yourself,’ he spat.
‘It might be possible,’ she theorized.

Don’t add a tag simply because someone is speaking. If two characters are talking and it’s obvious who is speaking, you only need add a tag for clarity. Novelists like the marvellous Mark Billingham manage to avoid using dialogue tags except when necessary, which makes the writing more immediate.

Poor writing, however, doesn’t necessarily lead to no book sales. If in doubt, remember that best-selling authors often produce books crammed with clumsy and pointless dialogue tags. As Dean Koontz says, ‘Not all published writers are good writers.’

As some other famous person once said, ‘So many books, so little time,’ which should explain why most of the books I review get either four or five stars. If I inadvertently start reading something that’s a bit crap, I’ll stop reading and won’t review, because after all, why should I read something just because millions of people think it’s fantastic? If it’s crap, it’s crap.

As Sergeant Phil Esterhaus might’ve said, ‘Hey, hey, hey. Let’s be careful out there and avoid those dialogue tags.’