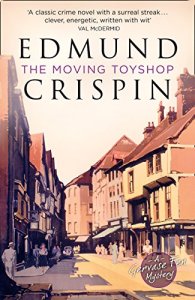 Poet Richard Cadogan sets off for a much-needed holiday to Oxford. Arriving late one night, he becomes intrigued to find the door of a toyshop unlocked. Snooping around, he discovers the dead body of an elderly woman. Before he can do anything else, someone bops him on the head. Informing the police, Cadogan is somewhat bemused to learn that the toyshop is not a toyshop at all, but a grocery store. After discussing the mystery with his college pal Gervase Fen (Oxford professor and amateur detective), the duo begins to investigate and soon uncover a mystery that challenges their powers of explanation.

Hailing from the so-called Golden Age of crime fiction, this is an interesting little book. Central to the plot is a ridiculously convoluted and totally silly storyline which defies all logic. Including weird messages in newspapers, and lots of literary clues, the story romps along like a Carry-On movie without the boob jokes. In normal circumstances, this would have been enough to send me screaming to my Agatha Christie bookshelf, but despite the silliness, this is a witty and thoroughly engaging novel, populated by a rich cast of diverse and surprising characters that contribute to a delightful, though distinctly odd, murder mystery. As a big fan of Alfie Hitchcock, I also loved the bit which apparently inspired the fairground scene in Strangers on a Train.

A witty and surprising tale that is by turns confusing and amusing.