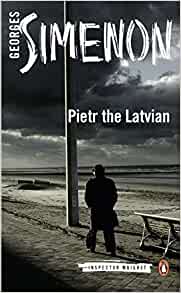 Georges Simenon’s first outing with his Parisian detective follows the pipe-smoking investigator round the seamier side of the city, as he attempts to track down master criminal, Pietr the Latvian.

My first impressions of this book were that either Simeonon was a really crap writer, or that the translation is at fault, my reasoning being the vast differences in quality between some passages and others. For instance, there are sections that are beautifully written, with vivid descriptions of Maigret schlepping round the rain-drenched streets hunting the elusive Latvian, while others read as if they were constructed by a twelve-year-old meths drinker on a bad day. Doing a bit of research, I’m relieved to learn that poor translation seems to be commonly accepted as the norm for these books. As various academics (ie folk cleverer than me) have commented on some of the [translated] text being clunky and badly written, I feel justified in saying that I will happily read more of old Simenon’s work as soon as I’ve learned to speak (and read) French. (Bientôt mon ami, bientôt.)

← ‘The Hard Swim’ by Keith Dixon